The title of this post is also the title of a book by Michael Wilcox. I was introduced to it during our recent SAQA Atlantic Canada retreat. The session was billed as a lecture followed by a hands-on opportunity to 'play' with paint. I always get a little nervous when told that I am going to play. It's not really my style and usually signals relatively undirected time spent making something that doesn't interest me. I was even more nervous because it involved paint. I don't 'do' paint, and when I need to use it I fail spectacularly at creating what I see in my head.

As Linda Mackie Finley (a member in our region) began to speak I exhaled a little. One of the first slides she showed looked like this. 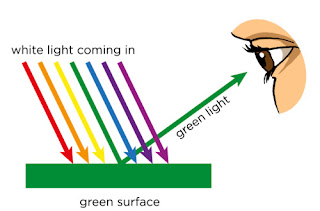 Ah. I relaxed a little. We were going to talk some science. Linda went on to describe how in available products - paints and dyes and such - each stick or tube of colour was actually a mixture of several pigments. If we applied a subtractive approach to mixing two commercial products we could predict the outcome. In other words, colour A would reflect some colours and absorb others. Colour B would do the same. Only those colours which were reflected by both colours would affect what the eye sees. It was an aha moment for me.

There is apparently great controversy over the book, the author and his ideas. I think he may have overstretched himself by proposing a new colour wheel when his actual intent is described in the subtitle of the book - 'How to mix the color you really want - every time'. He wants artists to understand that they don't need to buy every colour of paint the companies choose to sell but can, with six to twelve options, create any colour they need. Established artists may and do (there is a lot of Internet 'ink' devoted to bashing him) quibble with the way he approaches the subject. But for a total novice with a scientific bent it made perfect sense.

Linda followed her lecture with a set of eight exercises using various types of colouring agents (oils, acrylics, watercolours, dyes). We worked in pairs to solve a specific problem outlined in the exercise. Then we rotated to do the other exercises. It was great and I achieved what was set out in each exercise without creating mud on my palette. For that reason I'd recommend this book and approach to anyone who, like me, has struggled to achieve satisfactory results and might even stay away from a medium because they felt unsuccessful.


Posted by Christine Nielsen at 12:49 PM