For the last month or so I have been seriously considering how I will respond to the call for entry for our SAQA region's (Atlantic Canada) second juried show. I am excited about the prospect for the show - our membership numbers are up and the curator, Regina Marzlin, has done a great job of securing multiple venues in two provinces. I am very proud of the fact that Alan Syliboy has agreed to be the juror for the show.

Since the outset I have been stymied, as I always am, by the fact that the show has a theme. The membership chose Structures. The only thing I have known since I heard that word is that I wouldn't be addressing anything related to architecture.

Last week I realized that I wanted to do a piece about X-ray diffraction which is a technique used to determine the structure of crystals. When I went to the FAB meeting today I brought along a sample to work to test some of my ideas for an X-ray quilt. Today at FAB Regina demonstrated a mono-printing technique that permits the application of thin lines of color to a quilt. In the experimentation that followed Susan Lilley created a sample of handwriting transferred to her fabric. Everyone loved it.

I had never thought about adding text to a quilt but on my way home the idea for the X-ray quilt gelled completely. It will be titled Photo 51 which is a reference to a photo taken by scientist Rosalind Franklin who was part of the team that determined the structure of DNA. She was ultimately not given as much credit for her contributions as she probably deserved.

I will play with the basics of this image. 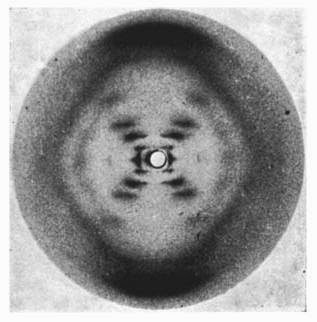 And the following text, a quote from a 1951 presentation by Rosalind Franklin, will appear somehow.

As will this one.

Science and everyday life cannot and should not be separated.

Posted by Christine Nielsen at 7:01 PM