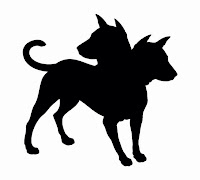 I was forced to be inactive this weekend because I am recovering from surgery to remove a tumour from my bladder. I was looking forward to a warm sunny weekend but both days ended up cloudy and chilly. George went off with the cycling group to do a lovely route in the Annapolis Valley. I tried hard to find some way to avoid feeling sorry for myself. In the end I devoted far too many hours to watching the live feed from a conference which was held in Newport, Rhode Island. (I did get some handwork done while sitting in front of my iPad.)

The conference was the second presented by a group called the Society for the Promotion of Applied Research in Canine Science. SPARCS is the brainchild of one person - Prescott Breeden. He had an idea and with the application of energy and intelligence (and some financial support from his parents) he pulled it off. More accurately, he created a revolution in the way in which important issues regarding dogs and companion animals are discussed. The conferences have brought together some of the best scientists in the field of canid biology with a special emphasis on behaviour and learning. The selection of speakers is refreshing in terms of the diversity of their viewpoints and approaches. The program includes opportunities for dialogue about those differences. On top of all that, the events are available at no cost to everyone around the world through live streaming.

I watched the second conference this weekend and was really impressed. There were several organizational ideas that I will definitely use the next time I put together an event. On the whole the speakers were well-prepared and engaged. They frequently referred to concepts and ideas in the others' talks which suggested to me that they were also there to learn. It was clear to me that lots of emphasis had been put on the visual appearance of the event. This added a sort of polish that enhanced the sense of professionalism which was developed by the speakers.

I think I heard that 40,000 people from around the world viewed some portion of the live stream over the three days of the conference. They stayed in touch with the organizers and submitted questions for the speakers using Twitter and Facebook. At one point #SPARCS2014 was trending on Twitter second only to the FIFA World Cup.

It all sounds pretty wonderful, doesn't it? There's always another side to the story, though. Some friends of mine attended the event in person. They were extraordinarily disappointed and will probably not attend any future SPARCS conferences. Most of the problems seem to be related to the venue. It was small and uncomfortable and unsuited to a multi-day event of this type. In addition, there were many accommodations made for the live stream at a cost to the people in the room. For example, the theatre was completely dark. It was impossible to take notes and for the speakers to interact with individuals. Even in question periods, queries submitted via Twitter received more attention than those from people who had paid to attend the event.

Registration was not inexpensive and the cost of staying in Newport was very high. Most of those who attended probably spent more than $1000 for the three days, even taking into account that most dog people don't seek out the fanciest hotels and restaurants. I heard that people in the theatre complained to the organizers but changes were not made because it would affect the live stream. By the end of the weekend my friends felt like second class citizens in spite of the fact that their registration fees were what allowed the conference to proceed.

The SPARCS board and Mr. Breeden have some hard work ahead of them. In just two years they have created an event of enormous scale and importance. But it may not be sustainable in its current form. They must make some tweaks while honouring the SPARCS mandate, the novel outreach component and the needs of those who wish to meet and network in person. I hope that they will find a creative solution. SPARCS is too good to lose.

Why bother describe SPARCS on my blog? It is always important to remember that there are two sides to every story and that things are not always what they seem. But what interests me more is the extent to which  my reaction to the conference might have been affected by the visual environment which was imposed on me. Everything was very 'shiny' and perfect and that gloss may have carried over into my evaluation of the content. I think the effect was minor because I was aware of that possibility in real time. If I use my friends' reactions as a standard it is clear, though, that what I saw on the live stream did induce a favorable bias of some kind. Or maybe the uncomfortable seats, dark room and lack of coffee created a different sort of bias in their response to the conference.

Posted by Christine Nielsen at 1:52 PM