It began with the bear

If you attempted to comment on yesterday's post, please try again. I mistakenly left the settings so that it was impossible to make anonymous comments.

I have been giving a lot of thought lately to the merits of several approaches to making art, specifically my art. My highly personal analysis and categorization is as follows:

1. Go where the winds take you. In these instances I become enamoured of a new technique or get accosted by the idea of creating a piece for a themed show.

2. Make your point, without regard for how others will receive the result. It is difficult to describe but, for me, this approach incorporates the idea that a viewer should be able to tell that there is a message, even if they can't figure out what it is. Also inherent in my thoughts about this approach is that the work not necessarily be attractive to viewers. In this scenario the message and my satisfaction trump everything else.

3. Make something attractive and make your point in a way that is really obvious to the viewers. This is a sensible option and one I see chosen a lot but it holds no appeal for me. And it sounds difficult - it means you have to excel at two things. It seems to me that most people fail at one or the other. Perhaps that explains my lack of interest.

4. Make something nice, that you like and which will also appeal to viewers, just because you can and the world needs more nice things. I have consistently rejected this way of working. In my mind, this approach is often linked to #1.

There are, of course, other options and other ways of stating them but that's what rolls around in my head on a daily basis.

My thoughts on these approaches shifted while I was away. The Oh, Canada show included lots of works that made me wonder what the curator was thinking and which even made me angry because they seemed a waste of gallery space. But there were several pieces that were attractive to me. I wanted to be in their presence because of the way they looked and made me feel. I was certain that the creators had a very definite point of view and that there was intellect and emotion behind the work but I could not discern the messages even after several visits with the artwork.

It began with the bear. When writing about the Oh, Canada show on this and the SAQA Atlantic blog I chose to use an image of a life size grizzly bear covered in handmade felt roses. I initially made that choice because it was the only piece of fibre art in the show. But as I continued to look at the images they grew on me.

Now I think the bear has taught me something or helped me decide which path is for me. We didn't get to see the piece, entitled Widow by Janice Wright Cheney from Fredericton, until our final stop at the Owens Art Gallery at Mount Allison University. It is the first thing you see when you walk into the building. It was interesting for me to view and record the reaction of one of my friends when we entered the gallery. Her face lit up, she ran to the bear and immediately posed for a picture. Who wouldn't want to create that kind of reaction? There was no doubt that the attractiveness of the object sustained our interest and kept us there long enough to wonder about the meaning. 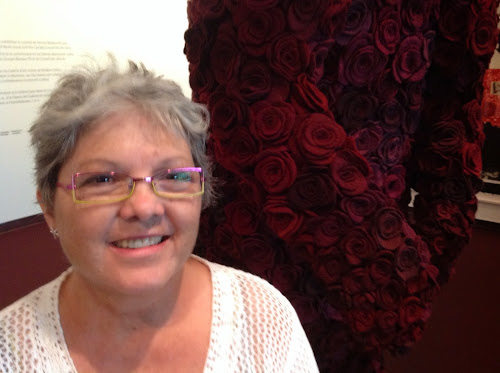 When I returned home I spent a lot of time on the artist's website and have looked at all of the pages and followed all of the links. She has a definite interest and point of view and is unafraid of creating work which viewers may find unattractive and even disturbing. The story behind the bear can be found here.

The other piece which struck all of us was also at the Owens gallery. It was Knight of Infinite Resignation by Diane Landry of Quebec City. Her website describes it as a sound installation with automation. It sat alone in a large darkened room. Each of the wheels was motorized and turned at a constant speed. On all but two of the wheels the bottles had sand which fell over the lights as the wheel turned and then fell away moments later. This extinguished and revealed the lights one by one. The sand made a sound as it moved across the surfaces of the bottles. 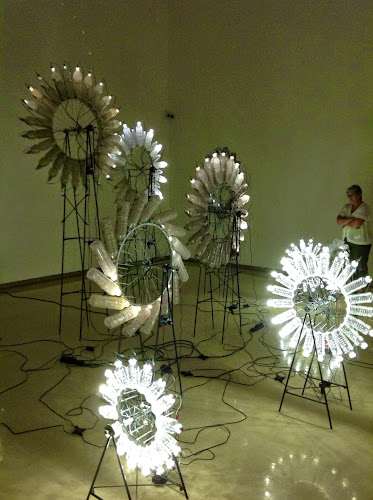 The effect was intriguing and mesmerizing. We all spent a lot of time in that room and returned to it again before we left the gallery. All of us agreed that we would like to live with the piece or something similar. We speculated about the meaning and the text on her site confirms that we were on the right track. As an aside, you can see that there are electrical cords on the floors. I found that sort of thing intrusive in other technology based artwork in the show but the visual and aural impact of this one overrode that distraction.

In both instances, the bear and the lights, I engaged with the art because of its form and then I stayed for the message. In the case of the Widow I could never have guessed what was at work in the artist's head while I came close with Landry's piece. I think this experience has helped me push back a resistance to 'pretty' that is inherent in my interpretation of approach #2. I see the merit in capturing the attention of the viewer for an extended period and it is the superficial appearance that accomplishes that goal. But I am also sustained in my conviction that there must be meaning, even if if it is impenetrable to the viewer.

So where does that leave me? I think most of the time I use approach #2. It feels like that's the right track for me but I will probably make a small shift toward 'attractive' in its purest sense of drawing people in. 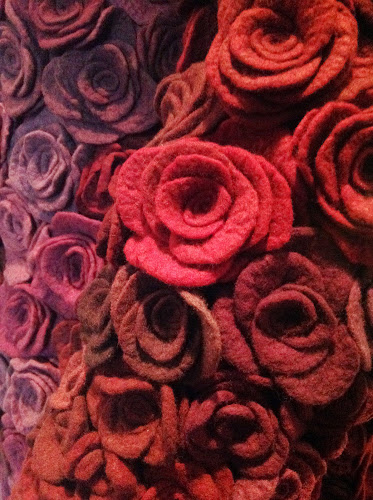 That's a lot of deep thinking. Here's something else to chew on. What is your reaction to the bear when you learn that it was created over a commercial taxidermy form and was constructed with the aid of several people? What if you also learned that the participation of others was an important part of the meaning/message of the piece?

Posted by Christine Nielsen at 8:24 AM

Email ThisBlogThis!Share to TwitterShare to FacebookShare to Pinterest
Labels: art